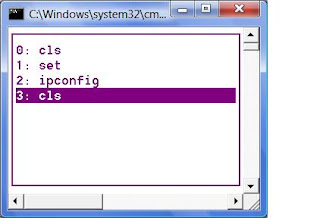 There are many useful commands and the shortcuts to invoke them in Windows.

One such widely overlooked but a sure time saver is the command history popup window from Windows command prompt.

As Windows users/power users/admins,we use command prompt to varying extent and yes it does get boring to type the command that we typed a few commands back 🙂

To avoid this,F7 comes into play as shown in the picture above.I wanted to type cls but it was already there before,so doing a F7 and going to the previous same command using arrow keys and then enter will do the job.This shortcut can be extremely useful when dealing with lengthy commands like say a psexec and then running a script on remote machine or a local one.